An Apple iPhone in the wild: My first sighting 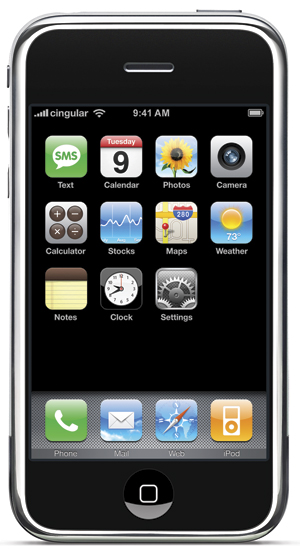 Tonight was the night... on an astronomy hike in Santa Cruz and after a short conversation I discovered the person walking next to me worked for Apple... then it happened, out of his pocket was an Apple iPhone! I tried to contain my interest as I leaned forward for a closer view... knowing that I wouldn't be able to hold it (or run away with it as fast as I could).

I actually had several questions in my ponderings of this mythical device over the past months, but I lost nearly all of them from my mind when I saw it. No, I wasn't hypnotized, I immediately fell back on my complaint that it was a locked down system, no ability to write programs for it, how I still carry my Palm Pilot so I can keep my aviation and scuba diving logbooks up to date, as well as my personal finance applications, etc. With a locked-down iPhone I'm either going to need the full-time internet connection and online sites to handle the same functions I currently use my Palm for, or I'm going to be stuck continuing to carry both devices.

He briefly mentioned his hopes and dreams for the future, not speaking for Apple at all, but saying that someday in the future perhaps Apple would release an SDK for it... awww, how nice that would be. Heck, I'd be so satisfied if they would offer a widget builder with some scripting and access to a database storage engine on the back end. Then someone would release those applications I most want in my pocket, the ones Apple didn't include on the phone yet:

Sure, I know that the web access would allow me to use online applications instead of locally stored versions, once I've had my hands on an iPhone and see how good the cellular coverage of high speed access is... I might be willing to switch to that paradigm, but for right now, I'm not all that enthusiastic for those elements. I look forward to June's release of it. Ahh, I look forward to June for so many reasons...